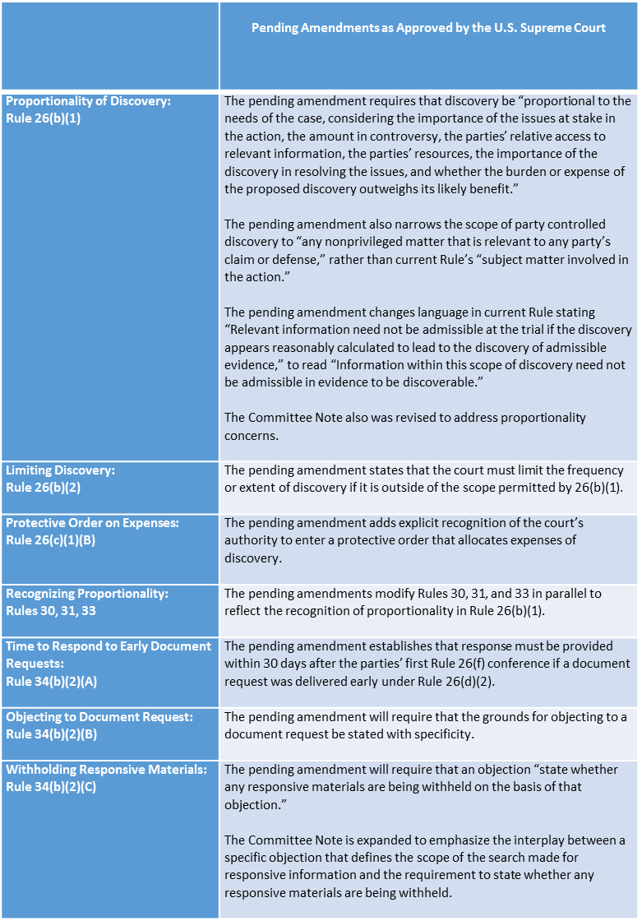 The course of federal civil litigation will take a turn on December 1, 2015, with pending amendments to several rules governing discovery, case management, and the preservation of electronically stored information (“ESI”) set to take effect absent intervening Congressional action. The pending amendments are nearly five years in the making, flowing from the Conference on Civil Litigation sponsored by the Judicial Conference Advisory Committee on Civil Rules at the Duke University School of Law in 2010 (“Duke Conference”). Through the Duke Conference and the amendment process, the Advisory Committee probed possible solutions for reducing the costs of civil litigation, particularly with respect to discovery. The pending amendments are a move towards striking the balance between the obligations litigants have to preserve and produce relevant information and the significant burdens of voluminous electronic discovery.

A key change to be ushered in by the amended Rules is the requirement that discovery be proportional to the needs of the case, based on consideration of several specified factors. Several of the pending amendments shorten timeframes permitted, increase the level of cooperation and planning necessary, and seek to limit the ability of parties to engage in overbroad or stalling discovery tactics. We provide an overview of the evolution of the amendments below and highlight key changes expected to take effect in December. Clients should be sure to confer with counsel regarding the impact that these changes will have on their litigation strategy and associated costs.

The scope of the amendments originally proposed by the Advisory Committee in August 2013 was broader than those ultimately approved by the U.S. Supreme Court in April 2015 and submitted for Congressional review. The August 2013 proposed amendments sought to (1) implement a requirement that the scope of permissible discovery be proportional to the litigation at issue, (2) pare down the presumptive number of discovery requests, (3) foster more cooperation between the parties and court involvement in managing litigation, and (4) provide additional safeguards for parties against sanctions for the failure to preserve discoverable information when the failure was not willful or in bad faith. Based upon feedback received during the public comment period, the Advisory Committee withdrew the proposed amendments that would reduce presumptive numerical limits on some forms of discovery and substantially modified the proposed revisions to Rule 37(e), narrowing the focus from broad spoliation sanctions to standards for addressing a party’s failure to preserve ESI. These revisions were approved by the Standing Committee and the Judicial Conference in 2014. Our previous posts (here and here) track the progression of the proposed amendments from publication for public comment in August 2013 to the Judicial Conference’s initial approval and submission to the U.S. Supreme Court for review in September 2014.

In February 2015, the Supreme Court suggested in a letter that two changes be made to the Committee Notes for Rule 4(m) governing service of a summons and Rule 84 on Forms. In the Notes for Rule 4(m), the Court suggested that the Advisory Committee strike the words “for good cause” at the end of the first sentence in the second paragraph, so it would read: “Shortening the presumptive time for service will increase the frequency of occasions to extend the time for good cause.” In the Notes for Rule 84, the Court suggested clarifying that the abrogation of the Rule does not affect existing pleading standards and providing additional sources for civil procedure forms. The Advisory Committee incorporated the Court’s suggestions into the proposed amendments and they were presented to the Judicial Conference for approval in March 2015. The Judicial Conference resubmitted the proposed amendments with the suggested Committee Note modifications to the U.S. Supreme Court in April 2015, at which time the High Court approved the proposed amendments and transmitted them to Congress for review. The pending amendments and accompanying materials submitted to Congress also can be found in U.S. House Document 114-33.

What Will Change: The Pending Amendments

Rule 1 is amended to explicitly recognize that the parties share responsibility with the court in construing and administering the federal rules “to secure the just, speedy, and inexpensive determination of every action.”

The pending Rule 37(e) amendment seeks to rectify the divergent standards established by various jurisdictions for preservation of electronically stored information and the imposition of related remedies for failing to preserve. The pending amendment (1) applies only to electronically stored information and (2) applies if ESI “that should have been preserved in the anticipation or conduct of litigation of litigation is lost because a party failed to take reasonable steps to preserve it.” If reasonable steps were not taken, and information was lost as a result, the next question is whether the lost information can be restored or replaced through additional discovery. The court may upon finding prejudice to another party from loss of the information, order measures no greater than necessary to cure the prejudice. And only upon finding that the party acted with the intent to deprive another party of the information’s use in the litigation, may the court: (A) presume that the lost information was unfavorable to the party; (B) instruct the jury that it may or must presume the information was unfavorable to the party; or (C) dismiss the action or enter a default judgment.

A redlined version of the pending amendments is available here.